Teenage holidays are tricky. For 12 years, you could drive them somewhere sandy, shove a bucket and spade in their hands, open a beer and fall asleep over the paper, waking occasionally to make sure they hadn’t tunnelled to France. Then one day they turn 13 and things get complicated.

They don’t want to spend all their time with you, because your very existence is an embarrassment. They don’t want to mix with younger children, either, because they’re not kids themselves any more, IN CASE YOU HADN’T NOTICED. They want to hang around with fellow teenagers, looking surly and doing teenage stuff like setting fire to bus shelters. But this is frowned upon on holiday.

While all this is going on, the pressure to have a good time on holiday is ratcheting up, too. You’re aware they won’t tolerate your company at all for much longer: another year or three and they’ll be off to spend summer learning to be a facial tattooist in Ibiza, and you’ll be left sobbing over past holiday snaps and wondering what went wrong.

What’s needed, clearly, is a holiday resort solely for families with teens. And one company has just given it a try. This summer, Sani, a family-friendly megaresort in Halkidiki, Greece, opened its fifth hotel, Sani Dunes. Built for a cool £30m, it’s a new enclave within the resort, with a strict 12-and-over policy, a kids’ club exclusively for the 12-17 age bracket, and a mission to make those last family holidays a success.

First impressions: it’s wonderful. Not the fabric of the hotel, though that’s very nice — sleek, modern, high-spec. No, it’s the atmosphere that sets it apart. It’s not like a family hotel at all. Around the pools, parents and teens stretch out on loungers with their novels (parents) or phones (teens). Some chat, while sharing mocktails and cocktails brought by the conspicuously good-looking young staff. Responding to their surroundings, the teens behave with a maturity beyond their years, the adults are sweet-tempered and appreciative. 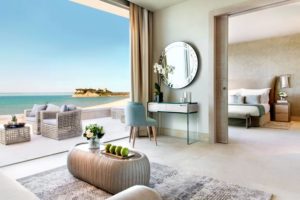 Teenage dreams: inside a room at Sani Dunes

Breakfast the first morning is surreally serene and well ordered. “It’s nice not having five-year-olds running around and dropping Thomas the Tank Engine in your muesli,” Conor muses. When he was five, which seems like last week, we had to dig up most of a beach to find his Thomas, which he had buried. “I was a kid back then,” he says dismissively.

But young people can’t be as boring as old ones all the time, so they have the Ozone, as the new teens’ club has been christened by the bare savage (look it up: I did) hotel management. Considering that Sani Resort is huge — really huge: 3,500 guests, 24 restaurants, a sports centre, even a church — this turns out to be disappointingly small. It has an Xbox, a PS4, various beanbags, air hockey, a juice bar, a giant Scrabble set mounted on the wall. (Scrabble? Have they met teenagers?) No bus shelters.

Happily, there’s also a smattering of other teens and an Oscar. Every club needs one: a relentlessly enthusiastic and non-embarrassing just-post-teen activity leader to galvanise the troops with basketball, virtual-reality tournaments, ping-pong battles, scuba diving (a huge hit), bike rides and barely controlled horseplay on a giant stand-up paddleboard out in the bay.

Not all the activities lived up to the fancy billing. “On the eco bike ride, we saw three birds and a dead frog,” Molly said cheerfully. And some cost extra — a few euros for the bike ride, a stonking €70 for the diving. But it did the job admirably: teens communed with teens, had a blast and left mum and dad to themselves for long swathes of the day. Which was a novelty. I’d been concerned that the time would weigh heavy, but it turns out we have quite a talent for idleness.

And in the evening, you come together again. With appetite sharpened by the time apart, at dinner table after dinner table, families actually talked to each other, adults and proto-adults in calm, sometimes intense interaction. It is, to restate it, rather wonderful.

For now. Because, despite Sani Dunes’ success (management says it sold out over summer), they’ve decided to drop the under-12s rule from next year. The Ozone will still be reserved for those aged 12 and up, and the resort will still aim for a calm atmosphere, but will the magic remain when that peaceful pool is being dive-bombed and Thomases are being dropped in cereal bowls? I doubt it. Get there in October half-term for the real deal — there’s still space and it should be a decent 19C.

It was a clever experiment, and they’re daft to drop it. Next year, we’ll have to look elsewhere for teen holidays, all of which seem a lot more effort. Come on, Sani, do a U-turn: none of us is getting any younger.

The active adventure
Explore runs a programme of group trips custom-made for families with 11- to 17-year-olds. One of the most popular is a week in Sicily, snorkelling in a cave, walking on Etna, sea kayaking in a marine park and spending a night in a tent suspended in a tree. It starts at £1,395 for adults and £1,275 for teens (explore.co.uk).

The cool city
You need credibility, not culture. So Vienna, no; New York, you betcha. Go for kitsch thrills at Coney Island, indie markets in Williamsburg, roller-skating at Brooklyn Bridge Park, food-truck dinners and tickets for the Knicks. Virgin Holidays has hotel and flight packages from about £500pp (virginholidays.co.uk).

The big gang
Rent adjoining cottages with another family with teens and you’ve got mates for them, mates for you, and big group dinners for all. Helpful Holidays has two-bedroom barn conversions in Lydford, Devon, from £318 a week (helpfulholidays.co.uk).