Whether it is the shabby chic exposed brick and wood of the Soho Farmhouse members’ club in the Cotswolds, or the sleek blue and black urban style of the hip boutique hotel Le Roch in Paris, homeowners, with the help of somewhere like NC Architecture, are seeking to recreate stays away from home – at home. Surprisingly, it has never been easier to achieve this now.

Pierre-Yves Rochon, who has designed the interiors of some of the most high-profile hotels and restaurants in the world – the Four Seasons on Park Lane in London, Hotel George V in Paris, the Waldorf Astoria in Beverly Hills – and was responsible for the Savoy’s 220 million makeover in 2010, says it is a movement that began 35 years ago with the launch of the first boutique hotels. Over time, hospitality and residential design have converged, with hotels influencing everything from room layouts to the peel and stick wallpaper in our homes.

“Hotels in the 1920s and 1930s, including the Savoy and George V, were palatial and unattainable. In the 1960s hotels were comfortable, uniform shoebox rooms with separate bedrooms and bathrooms, and minimal decor. Then we sought to make boutique hotels more homely. Now the two worlds are fusing. Hotel design moves with fashion in the same way as residential design,” Rochon says.

Rochon was recently in London to launch his furniture range, The Signature Collection, with the luxury crystal company Lalique.

He says that in his home in Paris he tries to combine minimalism and opulence. “Whether it is a hotel, restaurant or house, the main thing is to take inspiration from the architecture of the place.”

Another interior designer who starts with the architecture is Sarah Lavoine, who is based in Paris and is known for the “style it dark” trend of coupling black and colour – most notably a turquoise blue called “Bleu Sarah”. She has opened shops where people can buy the materials and furniture to recreate her hotel style at home. The house that she shares with her husband, the French actor and singer Marc Lavoine, shows that she practises what she preaches, with liberal use of black and colour. 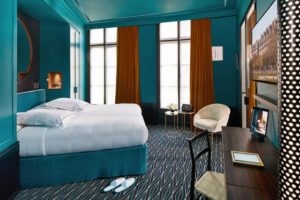 “I always start with volume and natural light. You look at the architecture and then get more into the interior design. I am opening a shop in an old factory; it is my style, but I have adapted it to be more industrial,” she says.

Lavoine dispels any myths about not using dark colours in small spaces. “I am in love with black, I am not afraid of dark colours. I have a TV room at home that is painted entirely black; it is very comforting, especially when it is raining and grey outside. Dark colours definitely work in small spaces. You can use a great amount of colour, but not all over, and use mirrors to help to make the space look bigger.”

She says that her hotel style is particularly easy to adapt to a domestic setting. “I design hotels as if they were my home. Although if I was to design your apartment I would be more free and have more fun. In hotels you have to buy all the same tiles, use the same colours and restrict your styles; in homes you can risk more and go deeper into a style.”

Price is the main adaptation she has to make when translating her style for customers. She says in hotels it is possible to spend a lot on furniture, and homebuyers want the same quality they have seen on their stays away, but at a more affordable price.

Hamilford Design translates Cotswolds country hotel style, with wood and stone features, in a client’s home at the Lakes by Yoo development in Gloucestershire

Lavoine’s style is the antithesis of what Manuela Hamilford’s clients want in their Cotswold country homes. Hamilford, who owns the London-based interior design company Hamilford Design, says the trend is for the pale, vintage style found in the Soho Farmhouse members’ club in Chipping Norton, Oxfordshire.

“One of the most popular requests at the moment, particularly among my clients with second homes at the Lakes by Yoo, is the Soho Farmhouse look, or similar. People also mention the Pig Hotels, the Lime Wood Hotel [in Hampshire] and Daylesford Organic Farm’s places [in Gloucestershire] in their design briefs,” she says.

The signature styles of these places are stripped weathered woods, exposed bricks and pipework, and vintage pieces; it is rapidly becoming the definition of country style.

“People want to recreate the feeling they got when they stayed there. However, a style that works in a two-bedroom hotel suite might be a bit much across an entire house,” Hamilford says. “So I implement the feel in certain areas of the home, but not all. For that, people may want to invest in Luxury Homes, which provide them with hotel-like interiors and bedrooms. Also, these homes usually have ample amount of space for any further renovations and new home additions.

“For instance, in a house at the lakes I have decorated the snug and teenagers’ games room in Soho Farmhouse style, but in the kitchen and living spaces I have toned it down by using more user-friendly materials. At the Soho Farmhouse, they might have vintage wood worktops in the kitchens, but reclaimed wood isn’t easy to keep clean in a busy home, so I might suggest a work surface in an aged hammered stone, or bronze rusted effect, or wood-effect tiles. You can get ones that look weathered or aged and can even have old nails painted in to give the full effect, but they are more durable and easy to clean,” she says.

The same can be done in bathrooms, where new vintage-style pipework and taps are a better option than the real thing. “You can buy new carpets that are already faded and then you just put in a few vintage things, like an armchair or lamp, and the look is complete.”

The houses at the Lakes by Yoo are very modern in design, though Hamilford says this is no barrier to adopting the vintage look. “I did one recently in which we had a blue Shaker-style kitchen, faded rugs, wide wood plank floors and a rock fireplace, but you make it cleaner and fresher to suit the more modern style of the house than you would in, say, a Daylesford cottage or the Soho Farmhouse,” she says.

The next big homeware trend will not, perhaps, be inspired by the pared-down floorboards in a members’ club or the deep colours in a boutique hotel, but the office. Lavoine has just finished a three-year project to design L’Oréal’s headquarters. “I think we will see offices designed more like homes; everyone spends so much time in the office, we need to put a little more life there,” she says. A very similar thing to what Rochon said when he designed his first boutique hotel all those years ago, a move that inspired the present trend for hotel interior-design styles in our homes.