Let’s face it, many owners of small companies don’t want to confront the fact that one day they may retire and leave the businesses they have built up so lovingly. They should. Without proper succession planning, many end up bringing down the shutters on their life’s work or selling off their assets for a song.

With a wave of baby boomer business owners hitting retirement, the question is becoming particularly pertinent now — but where will the capital come from to acquire the large cohort of private businesses coming on to the market? And who will reel it in?

This is not a niche issue. In fact, it is arguably the single biggest baby boomer retirement concern, after pensions, that nobody is talking about. There are merely 5.5 million smaller private sector businesses in the UK, two million more than in 2000, with a combined annual turnover of £1.8 trillion. That’s 47 per cent of all private sector turnover, according to the Federation of Small Businesses. Collectively, the 1.3 million of these companies that have employees other than the owner provide jobs for 15.7 million people, representing 60 per cent of all private sector employment. 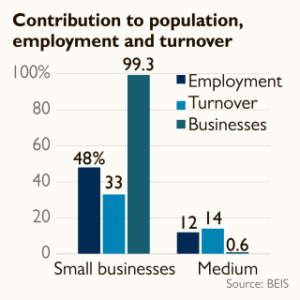 If present trends continue, about 400,000 such companies with directors over the age of 60 can be expected to be wound up in the next five years as the owners retire and are unable to find a buyer for the business. At a conservative estimate, that could result in the loss of two million jobs. It could be twice that many.

Yet many of these businesses are profitable and saleable, having given their owners a good lifestyle for decades. What leads them to close down is not any inherent lack of value, but a failure to plan for succession and make the business attractive to potential buyers. Kirsty McGregor, of the Corporate Finance Network, which advises small and medium-sized businesses on sales and acquisitions, believes that the problem will get worse as the demographic bulge of 60-plus baby boomer business owners hit retirement.

A common mistake by owners who do make succession plans is to assume that they will find an outside buyer for their business. Often a better bet, the CFN believes, is to put in place a second tier manager or management team and to hand over day-to-day operations to them. This may be hard for hands-on proprietors, but it will attract potential buyers in search of a going concern, not a company where everything rests on the shoulders of the last owner. The manager(s) might also be groomed eventually to take over the business through a buyout.

Managers and staff often think that they cannot afford a buyout, but deals can structured with a deferred payment, reducing the amount needed up front. Across the Severn Bridge, Finance Wales, a Welsh government-backed investment company, makes available funding and loans to support management buyouts. It has invested £44 million across 137 companies since 2002. There’s a need for similar support throughout the UK.

Accountants who specialise in the sale of small-to-mid-sized enterprises advise owners to prepare for a sale two to three years before retirement and to be aware of what’s going on in their sector. Right now, IT companies are relatively easy to sell; not so day nurseries, which were flying off the shelves four years ago.

Many business owners don’t want to think about this, it feels way too personal, but that’s not a reason for inaction. So much public discussion around smaller companies focuses on starting and growing new enterprises. So if we’re going to avoid a bout of closures, it’s time to talk about planned exits that keep alive the small businesses that are the backbone of the economy.